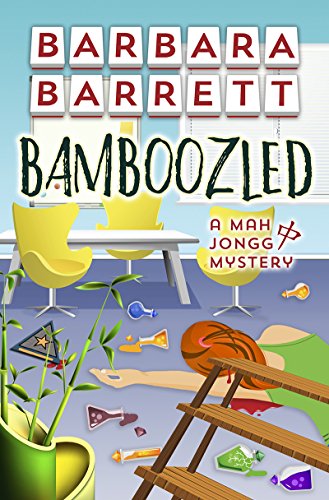 Essential oils distributor Dorcas Wiley is the boss everyone loves to hate. So when she turns up dead, killed by her own trophy, disgruntled saleswoman Cathy Broderick is the obvious suspect in her murder. Despite opportunity, motive and incriminating evidence, Cathy declares her innocence and enlists her mah jongg pals—Sydney Bonner and her cronies Marianne, Micki and Kat—to help save her from the death penalty.

Hot off a recent and nearly deadly investigation, the women are cautious about putting themselves in peril again. Syd’s spouse isn’t thrilled about another mystery in their lives, either, but he can’t resist the plea of Cathy’s husband. Soon, Syd is leading the way as they tangle with grumpy salespeople, the victim’s estranged husband and boyfriend, a mysterious housekeeper, a litigious customer, an annoyed sheriff, and Cathy’s own arrogant lawyer.

The women have their own issues to deal with in their central Florida town of Serendipity Springs. Kat faces a health challenge, Micki fields a mysterious inquiry from her ex, Marianne has a chaotic anniversary and Syd wrestles with her husband over who’s really in charge. But nothing puts everyday life into perspective like the moment when their investigation brings them face to face with danger.

The four retired amateur sleuths don’t seek out murder; somehow the circumstances and those affected drag them in. Meanwhile, as they attempt to gather information, life goes on in their community in such activities as a social group for those over 50, numerous stops at the local coffeehouse, and even a shopping trip to Naples. Sydney’s husband, Trip, and her friend Marianne Putnam’s husband, Beau, are golf buddies who spend many a day on the course. When not there, Trip is busy seeking to build a new post-retirement life, and Beau is often prevailed upon to join in Trip’s latest activity, which in this book is planning a repositioning cruise. Kat Faulkner has lived a frugal life until winning big in a lottery shortly after her mother’s death; suddenly, Kat has money and doesn’t know how to spend it. But her divorced friend and freelance writer, Micki Demetrius, does, even if it’s to guide Kat through a makeover and wardrobe change for her lounge act

Sydney shot a glance at Marianne. They’d uncovered a good part of the reason why Cathy was in such a state. “Given what you’ve told us, there doesn’t seem to be anything we can do to relieve your stress.” She attempted to lighten the mood. “Maybe one of your oils would help.”

Cathy attempted a smile. “Believe me, I have been trying that, but as great as they are, these oils can only go so far on mind matters. But you have helped me. My frustrations have been building up for several weeks. This is the first time I’ve shared my problems with someone else.”

Marianne joined Sydney near the boxes of creams and sunblock. “We should be going.”

“If you need to talk again,” Sydney said, “just call.”

Cathy followed them to the door. “I don’t think that will be necessary, but thank you for the offer.”

Once they were under way, Marianne was the first to talk. “Looks like her husband was right to be concerned about her. I never would have guessed from her demeanor at mah jongg she was under so much pressure.”

“Nor I. Why does she put up with that woman?”

Marianne glanced back at the condo complex they’d just left. “Maybe now that she’s voiced her feelings out loud, she’ll give some thought to quitting.”

“With all that inventory in tow? She’d be walking away from a huge financial loss, unless she could get other sales reps in the area to absorb it.”

When they arrived at Marianne’s house, they continued to sit in the car, wrapped up in their own private thoughts.

“There’s nothing more we can do at this point,” Sydney said at last.

“I was coming to that same conclusion. But it makes me feel so defeated.”

Just as Marianne was ready to leave, Sydney’s phone rang. Sydney put a hand up when she heard who was on the other end. “Cathy? Did we leave something behind?”

“No, nothing like that. The sheriff came to my door shortly after you left. Dorcas Wiley was found dead about an hour ago. Supposedly, I was the last person to see her. You said to call if I needed you. I guess I’m the chief suspect.”

“The characters are quirky, well-developed and just fun!”
–Valerie’s musings.

“I liked how the questioning was logical and well thought out, and had no clue as to the killer’s identity.”
–Carole Jarvis, “The Power of Words”

“This is not a simple cozy mystery set up. This is not simple anything. Well thought out and well entangled. Even if you figure out who did what, you want to understand why!”
–Laura’s Interests