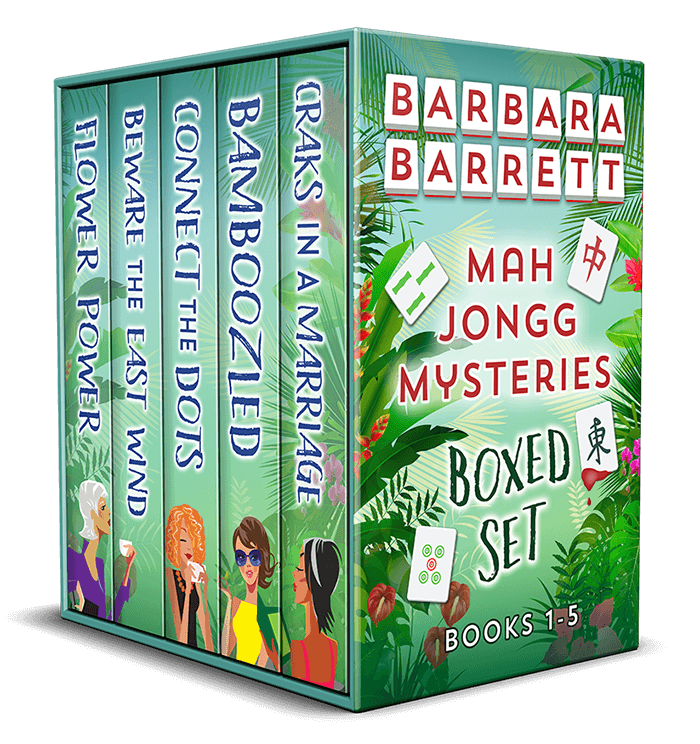 Welcome to Serendipity Springs and the first five books in the Mah Jongg Mystery series!

Mah jongg can generate killer competition. But murder? The answer is yes when it comes to four retired Central Florida friends, who find themselves solving baffling homicides in between the games they love. Whether you know how to mah jongg or not, join these intrepid seniors as they take turns leading their own private investigations. It turns out the mental agility they use to strategize each play is the perfect tool for tracking down murderers.

I’ve loved creating Syd, Marianne, Micki and Kat and figuring out what will happen to them next. I hope you’ll get just as involved in their investigations.

Craks in a Marriage
When a fellow mah jongg player’s cheating husband is found dead on a walking trail in the woods, she prevails upon Sydney Bonner, her usual competition, to figure out who the real killer is before she’s arrested.

Bamboozled
To clear the name of a player arrested for the murder of her heartless boss, a successful distributor of essential oils, Sydney Bonner enlists the help of her three friends in sniffing out the real culprit.

Connect the Dots
Asked by a mah jongg friend to investigate after the woman’s son falls to his death, journalist Micki Demetrius finds herself surrounded by suspects and shady characters as she snoops right into danger.

Beware the East Wind
A member of her playwriting class asks Marianne Putnam to clear his sister of the murder of her catering partner, a hypnotist. She and her three friends search for critical clues in a mesmerizing case while a hurricane threatens Serendipity Springs.

Flower Power
The owner of the supper club where budding songstress Katrina Faulkner is about to appear dies at his table. With most of the sheriff’s deputies considered potential suspects, Kat accompanies her sheriff boyfriend on a hunt for the killer.