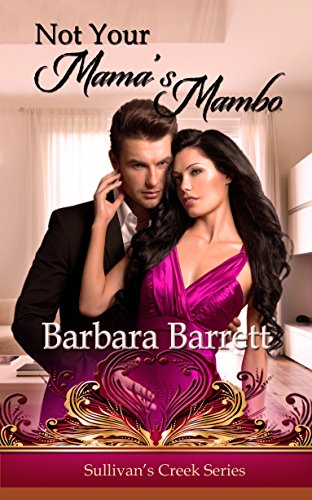 When the overbearing parents of billionaire Mike Woodley move back to town and reclaim the family home, he’s ready to escape to his new house. First, he needs an interior decorator. Local artist Darren Williams could be the answer to his prayers, until he insults her. But to pay off yet another of her sister’s gambling debts, she puts her bruised ego aside and accepts the job.

As they work on Mike’s house, the sexual attraction between Mike and Darren ignites, though neither wants anything more than a fling. Darren is still getting past the death of her fiancé, and the marital discord in Mike’s family has discouraged him from settling down.

Still, they can’t stay away from each other, until family matters intervene. Before their relationship can move on, Mike has to confront his family’s expectations and Darren must allow her own family to help her for once.

Not Your Mama’s Mambo

Did he have any idea how this mere contact awoke the nerve endings behind her ear? Momentarily, she was glued in place, telling the rest of her body to ignore the shock waves rippling down her neck to her lower region.

Even in the room’s dim shadows, she could tell when his eyes went smoky. “This room is giving me ideas I probably should ignore.” He paused, stared directly in her eyes, giving her a chance to decide the next move.

He was coming on to her. No mistake. She’d never been propositioned by a guy she barely knew. Well, maybe at a rave when she was much younger, but that didn’t count. Nothing from those days was real. Did he actually expect her to roll around naked on this wood subfloor? She couldn’t help glancing down. “Uh … ”

“Let’s check out the other rooms.” His voice had gone hoarse, urgent.