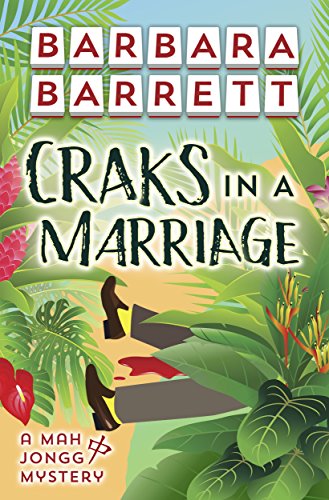 Though none of these four fun-loving, take-charge retirees has any training as detectives, the women agree to launch a secret investigation. As they dig under the happy veneer of their community’s social life, they find more than enough suspects, from shady ladies to resentful golf buddies, to keep them looking over their shoulders.

Could the murderer be lurking among the talent in a chaotic production put on by Sydney’s husband, who will do anything to keep busy in retirement? Could the sheriff, who may have more than a professional interest in chanteuse Kat, end up pinning the crime on the women instead? Each discovery during their investigations and their weekly mah jongg game keeps them running as they close in on the killer—but the killer may also be closing in on them.

This cozy mystery, the first in the Mah Jongg Mystery series, features four retired amateur sleuths who live in the small Florida town of Serendipity Springs, all female and all friends who play the game of mah jongg together. Though they don’t set out to investigate murder, after their first experience in this story, others start looking to them to help investigate subsequent homicides and questionable accidents. In this first book, Sydney Bonner takes the lead, although she turns to her three friends for help. Though this series features four protagonists, the others will take the lead in subsequent stories. Two are married, one is divorced and the fourth, who has been single all her life while she tended to her ailing mother, now finds herself the object of the sheriff’s attention in this series.

The four don’t seek out murder; somehow the circumstances and those affected drag them in. Meanwhile, as they attempt to gather information, life goes on in their community in such activities as a women’s club, a social group for those over 50, real estate transactions, numerous stops at the local coffeehouse, and even a shopping trip to Naples. Sydney’s husband, Trip, and her friend Marianne Putnam’s husband, Beau, are golf buddies who spend many a day on the course. When not there, Trip is busy seeking to build a new post-retirement life, and Beau is often prevailed upon to join in Trip’s latest activity, which in this first book is a town follies. Kat Faulkner has lived a frugal life until winning big in a lottery shortly after her mother’s death; suddenly, Kat has money and doesn’t know how to spend it. But her divorced friend and freelance writer, Micki Demetrius, does, even if it’s to guide Kat through a makeover and wardrobe change for her lounge act.

Craks in a Marriage

Olivia gripped her hands in what looked like a steely prayer. “I didn’t kill him, Sydney. You have to believe me.”

“But things haven’t been what I’d describe as happy between us lately. The sheriff is sure to uncover some of that. If he does, he might stop looking for the real culprit and tie it all on me.”

“But if you’re innocent, how could he make the charges stick?” Sydney blurted out her question, flabbergasted at the woman’s statement.

Olivia glanced away, as if not wanting to face her directly. “I can’t believe I’m saying this, but I suspect Paul was being unfaithful. I was about to confront him, as soon as I had more definite proof.”

Sydney opened her mouth and closed it just as fast. What could she say? What was she supposed to say?

“I know. You’re surprised. To our friends and the rest of the community, even to our children, we seemed like the perfect couple. No cares in the world. So supportive of each other.”

Maybe not that perfect, but until recently, Sydney would have agreed with the statement. “I, uh, had no idea.” Okay, sometimes she did stray a tad from the truth. When it would hurt someone else if she was too frank.

“Paul had a straying eye. Probably part of aging. Had to prove to himself he still had the old charm. For all I know, this might not have been the first liaison. He wasn’t as careful hiding things this time. That’s all.”

Sydney’s mind skipped around, trying to connect loose ends in Olivia’s words with other observations of late. Would Olivia kill Paul over an affair? Sydney couldn’t dismiss the possibility, despite Olivia’s claim of innocence. Olivia had admitted she was a proud woman. No doubt about that from her play at mah jongg. Would she stand by and let the man cheat on her? What if he wanted a divorce? Would she allow that to happen? Probably not. But the idea of Olivia bashing him in the head didn’t wash. She might be a woman who took action, but she was precise, methodical. If she decided to off Paul, she would do it in a less sloppy way that wouldn’t lead back to her.

“Did you tell that to the sheriff?

Olivia pressed her lips together. “No. Like I told you, I only suspected Paul of playing around. If he was seeing someone else, let the sheriff discover it on his own.”

Sydney wondered what she’d do if she were in Olivia’s place. Not that Trip would ever cheat. If for no other reason, although there were plenty of others, the man was too busy keeping himself busy in retirement to have time to mess around. “You need to prepare yourself, then. Because Sheriff Rick Formero is no pushover. If there’s something to find out, he will.”

“That’s why I need your help.”

“What? How?” This conversation was getting weirder and weirder.

“I need to spend the next few days with my children getting through the funeral and handling the estate, but I doubt the sheriff will back away from his investigation during that time.  I need for you to help me discover who really did kill Paul.”

Had she heard the woman correctly? “I’m not an investigator.”

“That’s just it. No one would suspect you of gathering information for me. But you and those cohorts of yours probably know everything that’s going on in this town. Use that talent to help me clear my name.”

“I just love a book that is full of intrigue, gossip and exciting characters. . . The characters are interesting and I absolutely loved the four women turned sleuths that take investigating seriously.”
-Texas Bookaholic

“Excellent characterization, an interesting background (I really want to learn to play Mah Jongg now), and subtle humor make CRAKS IN A MARRIAGE an enjoyable series debut.”
-Cozy Up With Kathy

“Syd and her friends are fun and funny. They are full of spirit . . . Craks In A Marriage was a fun fast cozy read.”
–My Reading Journeys

“The characters are great, quirky and likeable. They’re well-developed and complex. I really enjoyed them.”
-Valerie’s Musings