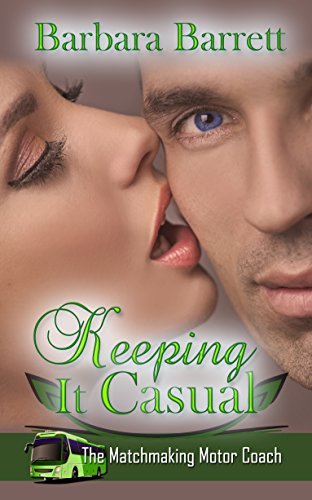 Talent manager Alex Appleby needs Geoff McKenna’s help. Her vicious client is threatening the reputation of Alex’s television-star father if Alex can’t convince her stepsister to go along with the client’s demand. Alex turns to Geoff to make the case to her sister. Geoff has his own proposition for Alex.

Thus far, his case of multiple sclerosis has been mild, but he’s unsure of his future. When his girlfriend pushes for a stronger commitment, he enlists Alex as his new pretend love interest so his girlfriend will break things off. When they discover they actually are attracted to each other, they agree to keep things casual, since Alex is only in town briefly and Geoff isn’t interested in anything serious. But fate intervenes as their feelings deepen. Alex must decide whether to relocate to Iowa from LA, and Geoff must place faith in his future.

Was this Graham McKenna? It had been almost a year since she’d last seen him. And then only briefly. She remembered the man being slightly taller and thinner.
His gait was slow, strained. He almost stumbled once, even stopped about ten feet from the door on which she’d pounded a few minutes prior.
When he bent, gripped his thighs, she shot from her car.

He didn’t seem to hear at first, until she realized he was trying to catch his breath.

“Who’re you?” Voice slurred, he attempted another few steps, only to pull up again.

“Let me help you to the door.”

He hesitated briefly, then almost fell into her. Something jabbed her. Keys. He couldn’t be an intruder if he had keys; he had to be one of the McKennas. No time to debate whether she could trust him enough to go inside with him. The man needed help. “Okay if I unlock the door?”

He leaned heavily on her as they made their way into the building. Her white slacks would take a beating, but she didn’t have a choice. He seemed out of it, as if he’d been drugged. He indicated a light switch tucked away on the back wall. She flipped it, illuminating the cavern of a garage. A blue-and-black motor coach occupied the center of the room, although she barely noticed it as he veered off to the right. They came to an interior wall with three doors. “Other key.” He headed to the door closest to the front of the building.

She unlocked this inner door and helped him into the room, then located another light switch inside.

“Thanks,” he got out before he collapsed on the couch.

“You need a blanket.” By the time she’d retrieved an afghan from the back of the sofa, he was out. She covered him, then stepped away to study the man.

A real pretty boy. That type abounded in Los Angeles, her home territory. A long time ago, she’d learned the hard way to avoid the category. Too much into themselves.
She should probably take off and return later, because she was pretty sure this wasn’t Graham McKenna. She was no shrinking violet where men were concerned, but she was also savvy enough to realize lone women should not put themselves at risk around men they didn’t know. But he was so out of it, should she leave him on his own?