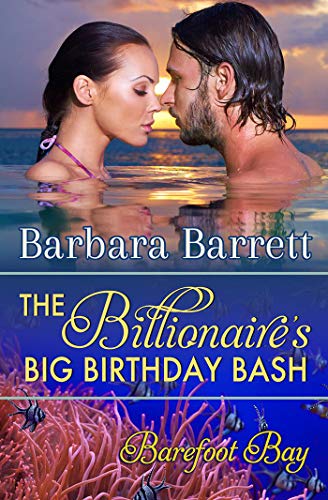 Billionaire geek Tobias Henson has it all. Only he doesn’t. He works all the time at his company in Atlanta, and these days, there’s no woman in his life except his mom. His secret burden means he couldn’t be there for her, either, when she was hospitalized with pneumonia. Intent on making up for his absence, he volunteers to throw a grand birthday party for her at Casa Blanca Resort & Spa that leads him right to the girl he grew up with on Mimosa Key—the girl who’s turned into a gorgeous woman with an adorable son.

Michaela Tierney has worked hard to get her life back in order after her police detective husband’s death, putting aside a career in marine biology to take her young son back to her parents’ home in Mimosa Key. Her event-planning business is starting to take off, and her newest customer—brought to her by Tobias’s gently contriving mother—promises to launch it into the stratosphere. Only her newest customer is the guy she couldn’t forget from her school days, a billionaire whose interest seems more than professional. But will an entanglement with Tobias threaten the fragile stability she’s finally achieved in her life?

While Michaela corrals a passel of persnickety mah jongg players for the big birthday tournament, Tobias longs to prove his passion for the lonely widow. But a perfect interlude turns into a troubled aftermath as they question motives and unravel each other’s secrets. Can Tobias prove there’s heart where there’s also heat? And will Michaela take a second chance on love—not just her love of the sea, but a shot at forever with the boy next door?

Tobias was in the middle of dressing the next day when he stopped abruptly. Was that him humming? He never hummed. But something was different this morning. His world seemed brighter, more alive. Could it be the result of the dinner he enjoyed the previous evening? The first family dinner he could recall in his mother’s dining room in a long time. The homemade lasagna tasted incredible as usual, but the pizza that accompanied it made the meal.

But it was more than the food. He’d forgotten how personable and funny Raul and Carlota Imperato could be. He’d been concerned at first that his mother might not appreciate sharing her time with him, even though the get-together had been his idea. But instead she’d taken to the role of hostess immediately, assuring that everyone ate more than they should, refilling water glasses frequently and making a fuss over Jeremy. And the kid. Such a charmer, yet so much the little boy as he kept eyeing extra pieces of pizza.

But it was Michaela who made the greatest impression. The doting but firm mother one minute and the attentive dinner companion the next. And beautiful. He’d be kidding himself if he didn’t admit he was attracted to her.

“Aren’t you the chipper one this morning,” his mother said as she sat at the table loaded with scrambled eggs, blueberry muffins and sausages. The idea of entertaining must have stayed with her throughout the night, because it was the next thing she mentioned as soon as he joined her. “I’ve changed my mind about celebrating my birthday.”

“You said you wanted it to be something special, something I would enjoy. You’ll finally get to spend money on me.”

This lead-up without further information was cute. He was only mildly apprehensive, and that was simply because the day before she’d so adamantly opposed the idea of doing anything. “Lay it on me.”

“I want to hold my own mah jongg tournament.”

Of all the gifts and ways to celebrate she could have mentioned, this one hadn’t been on his list. Was she testing him, just to see how serious he was? “OK. How does that differ from your usual session?”

“A tournament is sometimes held over a couple days, maybe even three. I want to house all the invitees.”

“Here?” Now she was pushing the envelope.

His brain did a quick calculation. She was right. This wouldn’t be cheap. But he was good for it, and if this was what she wanted, fine. “When?”

“On or near my birthday, of course. Since it’s in July and that should be the low season at the resort, there should still be openings for us. If not, well, you knowing the owner and all, maybe you could pull some strings.”

Who was this woman? Beatrice Henson did not believe in pulling strings.

“I’ll get in touch with Lacey right away.”